Global Concepts in Maps (1947): "Those Conical Projections Look a Little Flat to Me...." 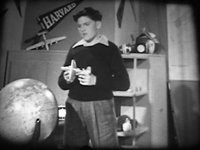 Bid on the complete, original 16mm print on eBay through 1/25/07!
In this early Coronet gem (Ms. Coronet? Are you listening?), boy Danny just doesn't "get" why map projections are important for him to understand. Actually, neither do we after watching this film; but after an afternoon visit from the disembodied voice of our narrator, Danny seems to understand that global map projections are relevant and add some larger meaning to his life. Highly entertaining way of learning the various concepts of global cartography, from "conical projections," to "polar projections," every imaginable global map distortion is represented here!

Of special note is the involvement of Dr. Erwin Raisz (perhaps the most famous cartographer and scholar of cartography of the twentieth century, and who taught cartography at Harvard for twenty years; also serving post as Harvard's map curator) as principal collaborator in the production of this film! (Notice the Harvard banner used as a set prop in the film still above!) 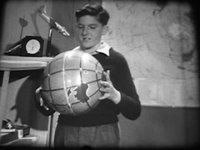 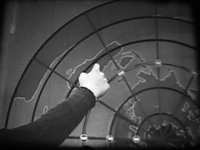 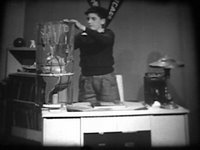 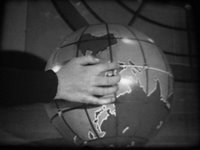 Note: The following clip was taken directly from the original 16mm print and has been edited to a mere fraction of the film's original length.

Comments:
I wonder if we were to compare his "polar projection" with a current one whether or not we would see the effects of global warming? Of course, you'd have fun trying to explain to him what global warming is and how it has affected and changed the polar ice mass... A whole new film...