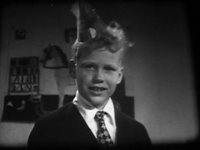 Bid on the complete, original 16mm print on eBay through 1/25/07!
This hard-to-find, early Young America Film explores every possible mathematic summation and subtraction of parts totaling and taking away from the number nine. Several times. This is presumably so that if you don’t catch on with the nine paper party hats, party favors and plates that little Peter sets out and counts and counts with the mechanics of an obsessive compulsive, you’ll definitely have figured out the various mathematical compositions of “nine” by the time you start counting those damn balloons! Midway through the film Mr. Projector had a horrifying thought: Is it remotely possible that YAF (later to become Centron) just may have produced such a film for all the natural numbers?! And why is seven year-old Peter coordinating his own party anyway? You have to admit there is something just an arm's length from tragic about Peter shouldering the burden of making all the arrangements for his own birthday party – but he seems to have that “if-you-want-it-done-right-do-it-yourself” type of happy-go-lucky assertiveness so uncommon in children his age, that we simply can’t feel sorry for him. 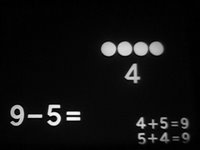 If you keep up with this blog regularly, as we here at ThinkStream Films are confident you do, you know that all of our staff is decidedly mathematically challenged. That’s why we like to have so much fun with chopping up the “math films” to help make them just a wee bit more entertaining. Fact is, we didn’t “get it” then, and we sure as heck don’t “get it” now. 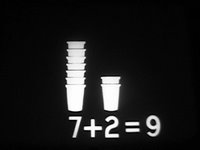 In the process of cutting up this particular gem, it occurs to us that there is a startling common denominator (mathematical pun intended) present in most every “math film” we’ve come across from this era: Food! Primarily sweets such as cakes, cookies, and ice cream! Some of us may hearken back to a comparatively recent past, albeit two decades after this film was produced, when a blue, cookie counting monster revived such an association through the magic of children’s television programming. We may not come out of the classroom having learned much about numbers, but golly gee -do we have a sugar craving something fierce! Ironically, it’s perfectly feasible to guess that in a single school day in 1947, children might be exposed to one of these films bribing them to learn mathmatics with the enticement of something horribly sweet and bad for them, then turn right around and view one of the scarier dental hygiene or nutrition films - a basic slap-on-the hand as if to say, “we’ll give you all the tasty treats we know you want if you only learn to associate them with numbers so that you can be good (even if overweight and diabetic) little mathematicians; but you really need to know the repercussions of eating those tasty treats (i.e., becoming overweight and diabetic) before you're able to make that decision wisely...." Sound familiar? It should. This is the way the game of American politics has been played ever since the Whigs and the Jacksonians first made the reluctant decision to shake hands with one another (but only after spitting in them first). 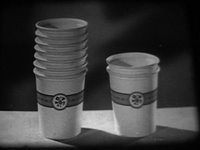 Another thought: This film was released in 1947. So many things happening that year in post-war America: The US Government’s lawsuit against the motion picture giant Paramount was in full swing, ultimately leading to the US Supreme Court’s wholesale slaughter of the vertically integrated structure of the movie industry by enforcing a strict break-up of what had become a monopoly of distribution control and theatre and studio ownership. This was also the year that gave birth to the first successful children’s television program in America, Small Fry Club, as well as a whole host of “firsts” in television; among them, the first ever televised World Series - an event so momentous, many to this day erroneously consider 1947 to be the birth year of television itself. This was also the year that marked the first noticeable signs of urban sprawl, the unparalleled growth of suburbs, and the near immediate economic death of giant urban movie palaces (as well as many of the urban centers they inhabited). 1947 was also a year of overall peace, contentment, and conformity…. Incidentally, my parents were both born that year…. 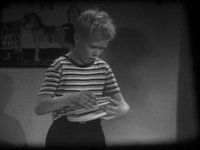 With all this as a backdrop for the unknowing baby-boomers just learning to add and subtract, we can’t help but think while viewing this film, of a more recent amazing year: 1969 – the year yet another milestone in children’s television programming premiered, Sesame Street, ushering in an unprecedented new era of non-commercially supported, education-driven entertainment. 1969 (lest we forget) was also the year of Apollo 11, Woodstock, war, and (this time) resistance to conformity….. Incidentally, that happened to be the year I first poked my head into the world….

In a nutshell, when we see this film from 1947, we feel as though what we are really seeing are the creative seeds of what would eventually grow and evolve to become that which was so eloquently represented in children’s educational television programming throughout the seventies, proudly pushing through the thick soil of history from which it sprouted its first noticeable greenery over half a century ago.


Note: The following clip was taken directly from the original 16mm print and has been edited (with all the numbers mixed up, of course!) to a mere fraction of the film's original length.

Comments:
What a funny little film. Peter is such a good little host and so self reliant. I also was born in the great year of 1947. It was a wonderful time to grow up. I did manage to escape the sugar addition somehow. Amazing, since I watched these very films.

I was born in 1945,and I, too, remember these films. I am now in education, and some of the workshops I attend make me think that education has not evolved. Keep up the great work!

I think I understand your comment regarding the stagnation of educational theory, "Anonymous." I also sense that you are frustrated by your perception that the education has not evolved (based on the workshops you have attended). I also share that frustration, though from an adult learning and professional development perspective; not an academic one. Please allow me to stress the difference I perceive between the film highlighted here and what I referred to on the blog as the evolution of "children's television programming throughout the seventies....": Public academic education theory has actually been quite slow to "evolve" in this country when compared to the commercial business of marketing children's learning (not to be confused with DTC marketing to children - or indirectly, for that matter, through their parents). Sesame Street, though not the innovator of the learning-is-fun concept, was certainly the first learning product entity to commercially market it. Even though SS was delivered as a free public television offering, the production itself was still a commercial engine, generating profit for self development. (To my knowledge, SS was never shown in public schools.) The message I believe that is to be garnered here is that historically, government-controlled curriculum is slow to change and less engaging than curriculum produced by private companies who are better able to shape their unique visions into product that is born of inspiration, passion, and singleness of purpose. This is also the fundamental difference between corporate training and academia.
Thank you so much for your insight; also for sharing such a relevent thought! Please feel free to email me personally, "Anonymous," as I would like to hear more about your experiences in contemperary education!