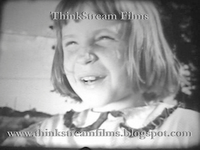 Bid on the complete, original 16mm print on eBay through 11/11/2006!
This amazingly campy Cornet send-up on early social behavior is nothing less than the ultimate case study in hypocrisy! We are introduced to “The Golden Rule” it is taught in the classroom (!!) and at home from the Holy Bible (!!!!) and its application to “everyone,” (“everyone” apparently being only comprised of Christians and Caucasians!)We see the basic teachings of various incarnations of The Golden Rule from Confucious to Jesus, then follow three scenarios where children at first want to do the wrong thing, but then are transported to this magical, albeit Orwellian realm that Coronet calls “Thought-land” (where we can see what people are thinking!), and ultimately change their minds to do what they in turn would like to have done to them. Sheer hilarity, this one! 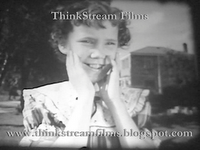 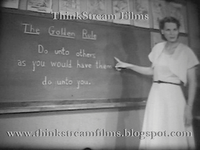 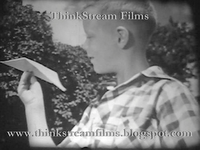 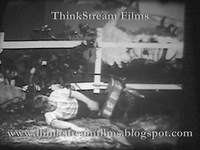 Note: the following clip was taken directly from the original 16mm print and has been edited (severely and to reverse the intent of the children’s’ actions) to a fraction of the film's original length.

Comments:
After going to "Thoughtland", I have decided that I like this film. It is really funny!

I liked this film but the chimes used to enter "Thoughtland" gave me the strange feeling that I was at the opera and had to hurry to finish my champagne.