Doing Things for Ourselves in School (1963) 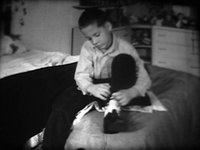 Bid on the complete, original 16mm print on eBay through 10/28/2006!
This film was part of Coronet’s “Beginning Responsibility” series and follows a day in the life of young Steve from the time he dresses in the morning, says goodbye to his mother and does a plethora of things all by himself on his way to, during, and back from school. Great footage of children crossing the street, in the cafeteria line, painting, reading, etc., etc.. Of special note is the Mongoloid-like goon who unsuccessfully tries to open a jar of paint! He’s the kid you always wanted to hit. Filmed in Los Angeles.

We here at ThinkStream films wonder whatever became of Steve. We suspect, now, right at the half-century mark, he is working as a used car salesman somewhere in Compton. At least he knows how to tie his own tie….

Also: We have noticed an interesting trend in Coronet productions as they inched their way into the sixties: All films targeting very young children suddenly have female narrators. We believe this was due to a little pediatric psychology consultation that must have taken place sometime around – oh, say – ’61 or ’62 (right around the time of this film); perhaps as a way to invoke the mother archetype – you know, “listen to your mother,” and all that Freudian/Jungian psycho-babble. Anywho, the female narrator in this film, we think, bears an uncanny vocal resemblance to a certain star of song and screen at the time who was inextricably connected with Rock Hudson, Tony Randall, Alfred Hitchcock, daisies and pillows. Oh well. Que Sera, Sera…. You decide…. 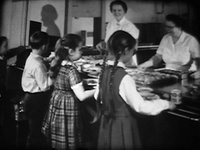 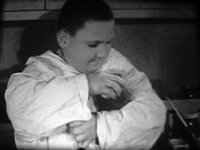 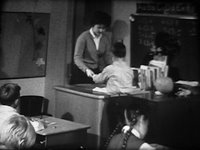 Note: The following clip was taken directly from the original 16mm print and has been edited to approximately half the film's original length.